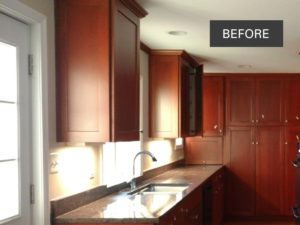 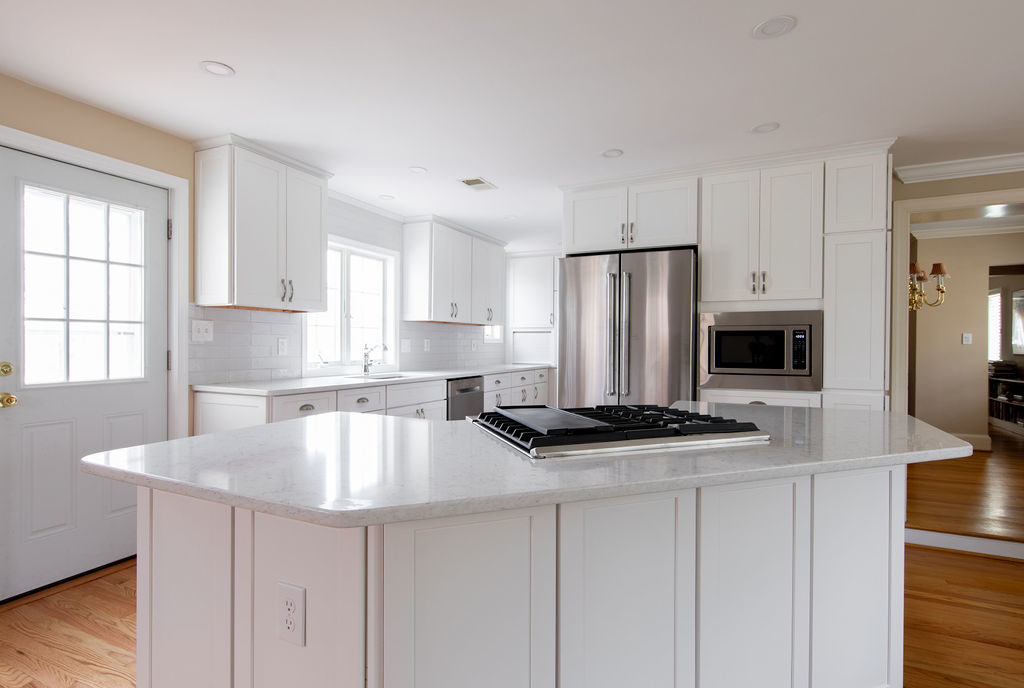 From our first conversation, we realized that David understands design and listens to what we’re saying.

When you’re the 4th owner of a 1940’s house, which has gone through additions and renovations, you’re bound to have a few surprises when you decide to update your kitchen.

The last time the kitchen was updated was in 1997. It had the dark wood and dark granite fashionable then and the galley space kitchen looked even smaller than it was. We knew it was past time for another update.

We chose to work with David after we saw the new kitchen that David remodeled for a close friend of ours. But it wasn’t just her kitchen that convinced us that David was the right choice, though. From our first conversation, we realized that David understands design and listens to what we’re saying. For example, my husband and David worked together to come up with the idea for replacing an old cabinet with a slimmer china cabinet that opened up the space and created easier access to the family room.

Once the project started, David brought in a lot of good people to work on our kitchen. They respected the time limit for this project and got it done. And they were also so mindful of the fact that we lived in the house through the renovation – everything got cleaned up every day. There was never a mess.

In particular, I was so impressed with Angel Mendez who was in charge of the construction crew. He was determined to get everything right, even if it meant redoing some things.

We both work so we had to rely on David to supervise and manage the project. David was at the house almost every day, checking on every detail and addressing any concerns immediately. And he always kept us in the loop about what was going on.

The biggest surprise came when David cut an opening in the pantry and found extra space behind the drywall (with a 1997 Washington Post newspaper lying on the cement floor!). This was just dead space between the kitchen and the bathroom that the previous renovation took no advantage of. David incorporated this space into the new design, which allowed the kitchen to gain more room and openness.

If I’m totally honest, the most fun part of this project was that I didn’t have to cook! But equally fun was coming home after work each day because we got to see the progress. They demo’ed the old kitchen in one day. And then the new kitchen started to take shape very quickly.

I’m thrilled with my new kitchen. It is much brighter, roomier, and easier to work in. But the best part is the new cabinet doors, which close without slamming. “I didn’t realize just how much I’d appreciate the quiet. I’m not constantly jarred by the slamming sound of these doors and I just love that.

This was the first major renovation for us and the experience has been so positive that we’re considering additional remodeling projects and we will definitely go with David for any project we do next.